A Louisiana woman has been charged with murder after DNA evidence linked her to a newborn girl left to freeze to death in a trash can 25 years ago, authorities said.

Sonia Charles, 50, of New Iberia, was arrested Wednesday and charged with first-degree murder, according to Iberia Parish Sheriff's Office officials. She was booked into the parish jail to await a bond hearing.

The newborn, dubbed 'Baby Jane Doe' by investigators, was found Jan. 24, 1994, in a 55-gallon drum behind Bob's Car Wash in Jeanerette, according to Sheriff's Office spokesman Maj. Wendell Raborn. The Aadiana Advocate in Baton Rouge reported that the girl died of hypothermia.

The baby, who lived for a few hours, was found with her thumb in her mouth. Her umbilical cord was still attached to her body, and the placenta in which she had developed was attached to the cord.

Raborn told Nancy Grace in a Sept. 3 episode of her podcast, "Crime Stories," that the temperatures in that part of Louisiana were in the 40s the night the baby was discarded.

"This infant was laying in a metal trash can and (the conditions) just literally sucked the life right out of her," he said.

Listen to the podcast below.

The car wash's owner, Jeanerette Alderman Bob Fontenot, found the infant the next morning when he went to empty out the trash, The Daily Advertiser in Lafayette reported on Jan. 29, 1994.

"It really tore that little community apart," Raborn said in the podcast. "We're talking a small country town. At the time, the major income from there was the sugar mill, which has since gone away. It was not a big city."

He expressed similar sentiments to the Advocate.

"It hit hard in a small community. Everyone took it kind of personally," Raborn told the newspaper. "Every homicide, every death somehow needs to be accounted for. We do our best on these old cases and if we can solve one, it's a plus for the community."

Stories in the Advocate’s archives said the girl was buried by the community in a donated christening gown and bonnet. Officers from the Jeanerette Police Department placed a Raggedy Ann doll in the casket with the infant, so she wouldn’t be buried alone.

A photo shared in a story earlier this month by KLFY in Lafayette shows the girl in her casket with the doll. In the black and white photo, which can be seen here, the baby appears to be sleeping peacefully.

Hundreds of people attended the infant’s burial in the Beau Pre Cemetery. Police officers served as pallbearers, with photos of the service showing them somberly carrying the tiny, 3-foot casket that held the child's body. 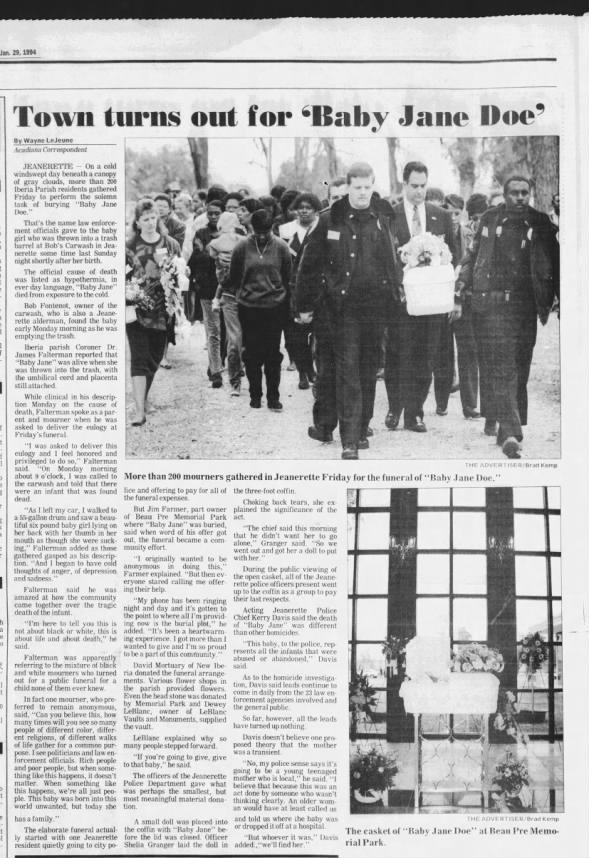 Falterman described being called to the crime scene and finding the “beautiful 6-pound baby girl lying on her back with her thumb in her mouth, as though she were sucking.”

"I began to have cold thoughts of anger, of depression and sadness," Falterman said.

The coroner said he was amazed by the community response to the baby's death. The funeral, which was paid for by members of the community, was attended by residents and public officials from all walks of life.

One anonymous mourner told the newspaper the baby’s death had brought people together.

"This baby was born into this world unwanted, but today she has a family," the mourner said.

"It's almost like we're the only family she's got. The whole city is her family now," Jeanerette police Officer Sheila Granger told the Advocate at the baby's funeral. "When somebody dies, somebody mourns them. Somebody had to mourn her."

A four-day-old receipt, a blanket and a girdle, which investigators believed was used to hide a pregnancy, were found near the can where the baby was dumped, but DNA on the items was not adequate to develop a suspect's genetic profile, the newspaper reported. Leads in the case tapered off and the case went cold.

In the "Crime Stories" podcast about the case, it was revealed that a box of evidence in the case was found to be missing when the case was reopened. Raborn told Grace the chief of police in Jeanerette at the time, Chief Kerry Davis, put all the tiny police department's limited resources into solving the case.

"He was going to put everything he could into it, to try to solve that and find out who did this to this infant," Raborn said.

DNA testing was in its infancy at the time, however, which limited the scope of the investigation.

"It was baby steps in '94. It was just really getting off the ground," Raborn said of DNA testing.

The box of evidence was ultimately found and the items were tested for DNA.

According to Sheriff's Office officials, technicians at the Acadiana Criminalistics Laboratory reexamined the evidence this year and were able to develop a DNA profile. That profile was matched with a family member of Baby Jane Doe whose genetic profile was stored in CODIS, the FBI's Combined DNA Index System.

"Detective Hotard was able to research the relationship of the CODIS profile and obtained a DNA sample from Sonia Charles," a statement from the Sheriff's Office said. "The (lab) was able to match Sonia Charles through DNA as the mother of Baby Jane Doe."

Friends and family came to Charles' defense on social media, describing her as a good woman. Several posted photo of her with family members, including a young girl identified by the poster as Charles’ granddaughter.

A friend, Jodie Lozoya, wrote that only God “has the last words.” She told people, in somewhat colorful language, to stop speculating on social media.

"Prayers to you, Ms. Sonia and family," Lozoya wrote. "This lady is a wonderful person, and I don't care who don't like what I posted. Only God knows. Justice system is a clown show."

In a comment on the page of one of Charles' family members, Lozoya wrote that Charles would "shine bright as a diamond." She wrote that she's never seen or heard of a perfect person.

"Social media demons, leave this family out y'all mouths," she wrote. "Don't know her story, but talking."

Jake James wrote on the same man's page that people make mistakes and God forgives them.

"Stay focused and let people talk and judge, but in the end only God can judge," James wrote. "Love y'all, my brother, and I mean that with all my heart."

Private investigator Stephen Menard, who heads the advocacy group Justice for Unsolved Murder Victims/Missing Persons, wrote on Facebook that he hopes to organize a candlelight vigil for the slain infant. He said he would also reach out to Charles' family.

Menard told the Advocate he hopes there can now be peace for the community, especially for the Charles family.

"It's going to take a long time to heal," said Menard, a retired drug agent with the St. Martin Parish Sheriff's Office. "For 25 years, the baby has been lost and now she's been found by family members. Family members know who she is now.

“Maybe the baby can finally get a name.”