President Biden’s proposed infrastructure package is the largest in decades and the first that seeks to repair damage many experts say was done by earlier highway projects that contributed to segregation in communities nationwide, including the Dayton region.

“I don’t know if there’s ever been something on this scale that the lens being used was equity,” said Amaha Sellassie, a community organizer and professor of sociology at Sinclair Community College.

The Dayton Daily News Path Forward project investigates the most pressing issues facing our community, including race and equity. This story digs into how local highways contributed to segregation and what could be done to mitigate those effects now.

Many local experts agree the construction of highways through Dayton’s city center divided neighborhoods. Some argue highways contributed to the decline of the once-thriving Black business district on West Fifth Street.

Highways, particularly I-675, also facilitated white flight to the suburbs, bleeding the city of residents, businesses, jobs and wealth.

But Randal O’Toole, a senior fellow specializing in land use and transportation at the Cato Institute based in Washington, D.C., a Libertarian think tank, said he disagrees with the premise that highways are racist. The flight to the suburbs would have happened anyway, and while highways bulldozed city neighborhoods, he said it was coincidental that Black Americans were often residents of the poor neighborhoods city officials wanted to remove.

One local planner who worked through the era said the area’s highways are a prime example of unintentional institutionalized racism.

“Nobody, everybody (is responsible),” said Paul Woodie, the former Dayton assistant city manager and planning director. “Momentum happens … It’s not like anybody made a conscious decision to do all that.”

What’s in the infrastructure plan?

It’s not clear whether Biden’s $2 trillion infrastructure package, the American Jobs Plan, will be passed by Congress or what the final version will look like. Provisions that seek to address inequity include:

O’Toole said he doesn’t believe Biden’s plan will work. He instead proposed states institute programs that help poorer families, including minorities, get low-interest loans on cars so they can use the highways to reach more job opportunities.

“The highways themselves weren’t racist and the highways created enormous opportunities for people of all incomes and all ethnic groups to get better access to jobs and other economic opportunities,” he said.

Funding for public transit, as proposed in Biden’s plan, is ineffective at lifting people out of poverty, O’Toole said. In 2016, the U.S. Census Bureau estimated about 21% of Dayton residents did not have access to a vehicle.

Many local governments can’t afford to mitigate the effects of previous highway projects like I-675, Woodie said.

“The only way that’s ever going to happen is a gigantic shift in urban policy by the federal government,” he said. “Local governments really can’t do much about changing that equation.”

ExploreCauses of racial inequity are identifiable and fixable, experts say

West Fifth Street today is mostly residential, but it was once home to a thriving Black business district nicknamed the Nickel. In 1940, West Fifth Street between Bank Street and Broadway Street was home to more than 70 businesses.

“Dayton had a very segregated economic profile here and the Nickel had a lot of entertainment clubs, doctors offices, clothing stores,” said Omope Carter-Daboiku, a cultural geographer and member of the Greater Edgemont Community Coalition. “(The highway) destroyed that area. It hasn’t been replaced since.”

The construction of I-75 in the 1960s and later U.S. Route 35 played a major role in the decline of that corridor, according to Andrew Walsh, a librarian at Sinclair Community College and author of “Lost Dayton, Ohio.”

“The construction of I-75 and U.S. 35 meant the demolition of many homes and businesses in multiple west side neighborhoods, but the ripple effect had a devastating effect on the larger area,” he said. “As the highways cut residents off from former neighbors and isolated them from stores, schools and other community resources, those areas suffered significantly. This was the case with the Nickel: I-75 cut it off from downtown (today West Fifth simply ends at Mound Street) … Other social forces contributed to the district’s decline, but highway construction was a major factor.”

Construction of I-675 was completed in the late 1980s after a long and controversial history. The project was proposed in the 1950s as a beltway around the city but officials later said traffic and population projections did not warrant construction of the western side.

The city of Dayton leadership and minority residents largely opposed the highway and business leaders largely supported it, contending that connecting hundreds of acres of open land prime for development would attract more businesses from outside the region than within.

In 1979, the Miami Valley Regional Planning Commission submitted a report to President Jimmy Carter’s administration recommending the approval of I-675, provided nine actions were taken by area businesses and governments to lessen adverse impacts on Dayton, minorities and low-income residents. Those recommended mitigating steps mostly included distributing fair housing across the region.

Few of the actions were taken. Today, affordable housing is concentrated in Dayton, Harrison Twp. and Trotwood and is not spread equitably across the region, especially not in the I-675 corridor, Miami Valley Fair Housing Center CEO Jim McCarthy said.

Also in 1979, Woodie was part of submitting a report written on behalf of the city to the Carter administration that predicted the I-675 corridor would draw businesses and wealthy residents away from Dayton.

If the highway were to be built, the city called for three major mitigating actions to accompany it: building U.S. Route 35 further west, annexing Wright-Patterson Air Force Base into Dayton so income taxes from the workers there could support city services, and regional tax base sharing.

The extension of U.S. 35 to the west took place. Today, Montgomery County’s Economic Development/Government Equity program distributes sales tax revenue for economic development projects. But regional tax base sharing did not occur on the level the city proposed, Woodie said.

“What the (Dayton) report predicted in terms of impact, happened,” Woodie said. 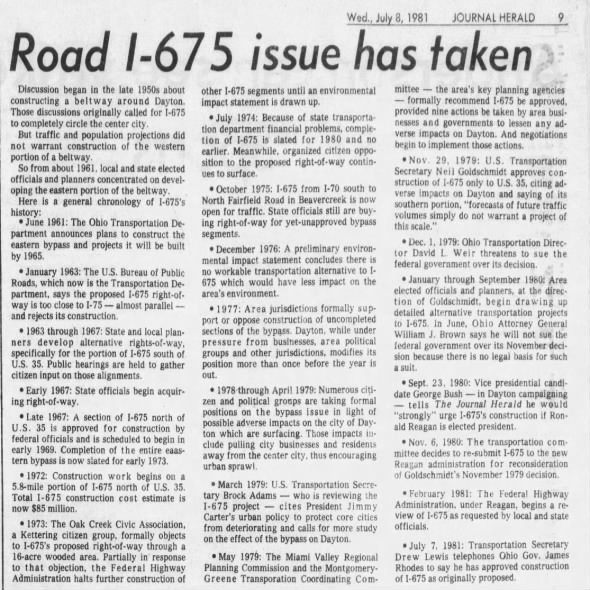 The highways were not the only factor contributing to white flight, but they played a role, according to local experts.

Between 1980 and 2010, the top tier of aggregate income moved outward and further away from the urban core to communities along the I-675 and I-75 corridors. Meanwhile, the lower tier of aggregate income stayed concentrated in the urban core and in areas with high minority populations, according to a report by the MVRPC and the Kirwan Institute at Ohio State University.

John Gower, an urban designer for Citywide, tracked jobs during his tenure as Dayton downtown planner. Between 1985 and 1994 he estimates that between a quarter to a third of downtown jobs left, with many of those going out to the I-675 corridor.

Pete Bales is a Beavercreek city councilman, Bath Twp. administrator and the former assistant city manager of Fairborn. The Beavercreek of his youth had a lot more cornfields.

“Beavercreek took full advantage of the interstate going through the community,” he said. “I’m proud of Beavercreek. I’m proud of what we’ve built as a community, not because we’ve done anything to keep segregated at all.”

A long history of housing discrimination — redlining, exclusion from G.I. bill benefits and more — meant few Black residents could afford to buy expensive new homes in the suburbs, said Faheem Curtis-Khidr, a professor of American and African American history at Sinclair Community College. Policies in areas of some suburbs such as zoning rules that bar the construction of multifamily and entry-level houses also perpetuate segregation, he said.

All of the cities and townships that I-675 runs through are about 8% Black or less (Centerville is 6.1% Black, Kettering 3.4% Black, Beavercreek 2.3% Black and Fairborn 8.1% Black), while Montgomery County is over 18% Black and Ohio is about 12% Black, according to U.S. Census data.

ExploreBlack babies dying at alarming rate: How can their lives be saved?

Not repeating the past

The Ohio Department of Transportation and the Miami Valley Regional Planning Commission have taken steps to include equity into their evaluation of future infrastructure spending.

“So we would put more points on a city of Dayton project that had bottlenecks in an urban neighborhood … than a suburban community’s widening project on the edge of the region,” he said.

“The infrastructure is built, the damage has been done,” he said.

In the past year, several area suburbs began forming committees, holding town halls and making statements about diversity and inclusivity. But those governments should do more to implement laws and policies that could remedy past discrimination, Curtis-Khidr said.

Making up for the Dayton region’s history of unequal development would be “tricky” on a local level, said Michael Outrich, social research associate at the Kirwan Institute for the Study of Race and Ethnicity at Ohio State University.

Dayton-area municipalities should do more to work together, Outrich said. This could look like:

Kettering Mayor Don Patterson and Centerville Mayor Brooks Compton did not return requests for comment on whether they would be open to regional tax base sharing or changing zoning codes that discourage affordable housing.

Bales and Beavercreek Mayor Bob Stone said Beavercreek’s lack of an income tax means the city is unable to contribute to a regional tax plan.

“As a result of our limited revenue sources, we are an estimated $200 million behind on our own infrastructure needs. Without an income tax, we clearly are having our own difficulties,” Stone said. “Any barrier to affordable housing is more likely due to property values, not the zoning code. The city does not control the free market and it does not determine the property values within the city.”

The state and federal government would likely be better equipped than local authorities to help Dayton and minority residents catch up, “mostly because Dayton doesn’t have the dollars,” Outrich said.

U.S. Sen. Sherrod Brown, D-Ohio, said in an emailed statement: “We have an obligation to invest in communities of color to undo the generational harm....caused by unjust policies that furthered our country’s systemic racial inequalities and to ensure that all communities have an opportunity to thrive.”

U.S. Rep. Mike Turner, R-Dayton, did not return a request for comment. Turner released a statement saying too much of Biden’s plan includes money for things that are not infrastructure. Turner introduced legislation that would require at least half of funding in infrastructure bills go toward construction or maintenance of more traditionally defined infrastructure such as roads, bridges, railways, airports and schools.

“I know that in some cases, infrastructure projects such as our state highway system have divided neighborhoods and that is a real problem,” he said. “With regard to this new infrastructure package, (we have) to avoid those sorts of things.”

Portman pointed to legislation he recently introduced that would make short-term education and training programs eligible for federal Pell Grants as something that could help minorities get trained to benefit from the jobs created by a federal infrastructure package.

It’s going to take more than one bill, even a large infrastructure package, to reverse a history of discrimination, Outrich said.

“Trying to fix hundreds of years of history is not going to happen overnight,” he said. “I don’t have a lot of confidence that a big spending infrastructure bill is going to fix it all either. I think we need persistent (action) over time to bend the needle more.”

About the Path Forward

Our team of reporters digs into the most pressing issues facing our community. The Path Forward project seeks solutions to these problems by investigating race and equity in the Dayton region. Follow our work at DaytonDailyNews.com/path-forward.

Jordan Laird is a Dayton Daily News All Media Journalist. She joined the newspaper in August 2020.